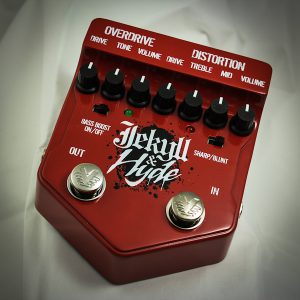 From its first appearance in 1997, the Jekyll & Hyde was the first pedal to combine two separate effects in one pedal. The V2 Series gives the same great tone guitarists have come to love plus an added noise reduction system. Each channel of the Jekyll & Hyde has separate controls, giving you the ability to use them separately, or together. All of this adds up to one of the most versatile distortion/overdrive pedals on the planet!

Just got my Jekyll and Hyde out of the box. By far the BEST distortion/overdrive ever. Haven’t even really had that much time to tweak it and it already sounds 100 times better than any pedal I’ve ever spent hours and hours tweaking. I think I just became brand loyal.

Note: All dimensions are approximate maximum dimensions. Current draw is shown from bypass to channel(s) on.