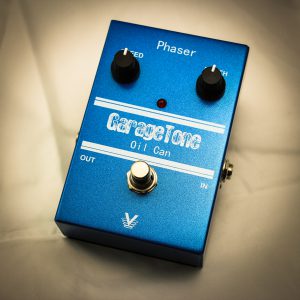 The GarageTone “Oil Can” Phaser from Truetone is a classic sounding analog phaser. With both Speed and Depth knobs, the Oil Can Phaser has a wide variety of warm analog tones, from swooshing to pulsating. Placed before distortion or overdrive, the Oil Can is perfect for classic or modern rock, ska, punk, and more. On its own, the GarageTone Oil Can Phaser gives warmth and movement to textured rhythm parts.
When we were first thinking about making a phaser, we pulled in a bunch of old and new phasers from other companies to see which sounded the best to our ears. One of the guys in the office brought in an old “Electra” phaser from the mid 70’s which sounded better than anything else we tried. We did some research on it and found out that it was actually made by Electro-Harmonix for the Electra Guitar Company around 1975-76 and was, in fact, a re-housed Small Stone. We compared it to a Small Stone and it didn’t sound anything like it… the old one sounded infinitely better.

The reason why E-H changed the circuit over the years is that the main chips used in the old version haven’t been made for decades. Undaunted by that inconvenient fact, I gave the old circuit to our chief engineer, R.G. Keen, and asked him to figure out a way to use some equivalent chips to work in a similar circuit to re-create the sound of the Electra pedal. It was a tall order, but he figured it out and after a few tweaks, we had the Garagetone Oil Can Phaser and yes, it sounds just like that old Electra Phaser from the 70’s.
– Bob Weil

Note: All dimensions are approximate maximum dimensions. Current draw is shown from bypass to effect on.